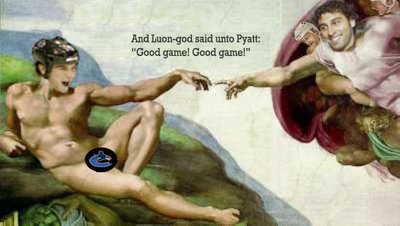 I've abandoned the evangelical faith. I now pray to the Luon-god, a coin phrased by Temujin tonight during the game. Once he said that, the crew laughed. But Luongo was god-like in goal tonight. He stopped 38 of 39 shots in a 3-1 Canucks victory over the Sharks. Most of those saves were heroic to say the least. The Sharks should have walked away with this one. The Canucks got off to a slow start much like they did against the Kings on Friday. But Luongo was not to be denied tonight. I can't even put it into words. Every Canuck fan will be talking about his best performance in a Canuck uniform to date.
32 of his 38 saves were made through the first 2 periods. Then the Nucks clamped down (fricking finally) in the 3rd.

"They were throwing everything at the net, but at the same time that sometimes gets me in a groove and makes me feel better," said Luongo.

Well, the Canucks probably shouldn't do that on a regular basis. Much like the Kings did on Friday, the Sharks had 22 shots in the 2nd period alone. Luongo made spectacular saves. Daniel Sedin scoring a flukey goal in the middle frame that was the game winner. Must have been deflating for the Sharks.
Late in the 3rd, while we nervously chewed every nail off our fingers, Brendan Morrison scored the back- breaking 3rd goal into the open net. I must have spilled half of my drink jumping out of my chair!
How many points did Thornton, Cheechoo and Marleau have tonight? NONE. Thornton can't have his way with Vancouver anymore. Ohlund checked him well.
The Canucks killed every Shark man advantage to remain tops in the NHL on the PK, as well halting the best PP in the League.

Matt Cooke played a spirited game tonight. He was spectacular on the PK.
Jan Bulis played with alot of hustle again.

Since the pathetic Flames can't beat the Hawks, the Nucks are back in 3rd spot in the Western Conference, and tops in the Northwest.