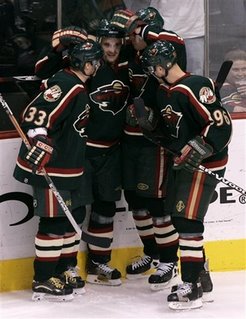 And Demitra scored a 60-foot shot on Luongo to open the scoring. The Wild capitalized on their chances and the Canucks didn't show up. Most of the Canucks' 22 shots were ineffective and non-threatening, except for Linden and Bieksa, who had the only 2 goals for Vancouver tonight. Luongo may have looked shady on the first 2 Wild goals, but he settled down afterward and gave the Canucks a chance to win. The Canucks' offence, however, could not come through.
In my opinion, the Canucks lost this one while on the PP in the 2nd period. The Wild pressed hard while shorthanded and had a couple of odd-man rushes, turning the tide, and scoring moments after the powerplay had ended: a perfect slapshot by Branko Radivojecik over Luongo's shoulder. That made it 3-1 and put the icing on the damn cake.
Minnesota played a great home game, and avenged their loss to the Canucks last week.
The Canucks have lost 4 straight on the road, and have been outscored 20-6 in those 4 losses.
Markus Naslund had this to say:

"We made way too many mistakes. We know how to play against these guys, get the puck in deep. Do to them what they did to us," Naslund said. "It was a crucial game. There's no reason we couldn't have a good effort. We took a big step back tonight."


Yeah, Naslund especially took a step back tonight. To me, he was invisible in this game until there was only about 4 minutes left in the game.
Other missing Canucks:
Taylor Pyatt. I didn't notice him out there at all. He did have 1 assist though.
Matt Cooke. He got in shit for giving Boogaard a shot on the bench in the 1st period. Other than that, he was a -4 on the night and had 3 shots on goal.
I don't remember seeing Brendan Morrison do much either.
To be honest, when Trevor Linden and Jan Bulis are your best players on any given night, you are probably going to lose. Bulis was probably the best Canuck overall. Fuck.
This was an important win for the Wild. It keeps them in the race for the final playoff spot. In fact, this win vaults the Wild into 7th spot in the Western Conference, and drops the Canucks to 10th spot. Fuck.
All is not lost...but.......fuck.
Next up is the Bruins, who look to destroy the Canucks on Thursday, after blasting the Senators 7-2 tonight. Hey, you never know. The Canucks tend to play well on the east coast.