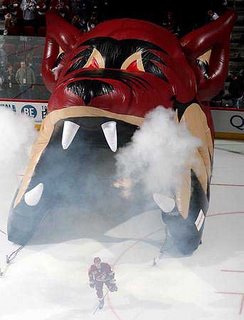 This is a photo taken from the Coyote's first game of this season against the Islanders. I don't watch any Coyotes games, so I'm wondering if they always use that dog over the entrance way? I'm also wondering if that is the most pathetic-looking entrance in the NHL?! It looks too toyish for my liking.
Now that the Coyotes defeated the Sharks 3-2 last night, you have to wonder if they are starting to find some chemistry and work ethic. The Dogs defeated the Ducks 2-0 late last week, then fell to the Kings in the shootout on Tuesday, and then beat a great team again last night. Are we to believe that the Coyotes are turning it around?
Don't bank on it. But they should improve some. This should be at least a .500 team. The Coyotes are famous for blowing leads and losing games in the 3rd period. Last night, Curtis Joseph had to stand on his head to prevent that from happening again.

"Against one of the best teams in the league, you need to do a lot of things right, and you need to be a little lucky," Coach Gretzky said. "Our guys played hard, our power play was excellent ... and Curtis was outstanding."


Yanic Perrault, who scored the winning goal, said:
"We just kept working all night. I got a rebound, and I had a bit of time, so I went around the net. ... It's huge for us (to win late). Lately, it's been the opposite for us. We've been losing in the last minute, or the last few seconds."

Despite a positive step by the Coyotes, there is still a lot of talk of impending trades out of Phoenix, as the Arizona Republic states:

The NHL lifted its holiday roster freeze on Wednesday, and according to multiple sources the Coyotes have been getting inquiries from other teams about impending unrestricted free agents Ladislav Nagy, Mike Comrie and Shane Doan.
No deals are imminent, but by virtue of their weak offensive numbers, those three players have given the Coyotes no choice but to consider all offers.


Nagy had no points last night. Doan had 1 goal and 1 assist. Comrie had 1 assist.
What are the chances of us seeing one or all of these guys moved? I think realistically, they will be moved at the trade deadline, when teams are desperate.