Thoughts on the Islanders/Rangers game

Share All sharing options for: Thoughts on the Islanders/Rangers game 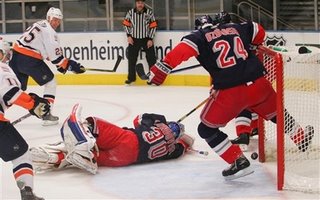 I tell you what, after watching the Leafs/Canadiens on Saturday night and the Islanders/Rangers on Sunday afternoon, it really makes Canuck games look boring! Aside from that, alot of the Eastern Conference games are high-scoring in the new NHL, and it really is a breath of fresh air. I don't mind watching Eastern Conference games anymore.
Yesterday's Isles/Rangers game was a real beauty for many reasons.
* The Islanders were went up 4-0 in the 1st period, even though they were outshot 14-8. They capitalized on their chances when they got them, and made Henrik Lundqvist look bad. He was pulled after 20 minutes. Rick Dipietro looked solid.
* Tom Renney must have ripped the Rangers new bungholes in the 1st intermission, because the Rangers came out flying in period 2, outshooting the Islanders 19-7, and making the score 4-3 with only 3 minutes left in the middle period. The fans at Madison Square Garden were going bananas, and the tying goal was imminent. But just over a minute after Brendan Shanahan scored the Rangers' 3rd goal, Vik Kozlov scored his second goal of the night and put the Islanders up by 2 again.
* 7 minutes into the 3rd period, Shanahan, who was shooting the puck from all over the place, scored his hat trick goal to make it a one goal game again. The momentum was all in the Rangers' favor. The fans smelled a comeback again, and so did I. But Kozlov scored his hat trick goal about 7 minutes later while the Rangers were pressing hard, and then he scored his 4th goal of the game 4 and a half minutes later, with only 1.5 minutes left in the game. The Islanders won, 7-4. Kozlov is playing super in Yashin's absence.

It's hard to believe the outcome when you observe the final shots totals. The Rangers outshot the Islanders 43-21 overall. Right now, Charles Wang doesn't look so crazy for signing Dipietro super-long term, because Dipietro is looking pretty sharp lately.
Ted Nolan has the Isles playing gritty and with alot of confidence. This team is not a joke as most predicted they would be, including myself. They are in top spot in the Atlantic Division, one point ahead of the Devils and Rangers. They are in 3rd place in the Eastern Conference. They are 6-3-1 in their last 10 games, and are thriving even without their emerging captain Alexei Yashin. I didn't see this coming, but you know what? I LIKE the Islanders winning like this. I like the underdogs proving people wrong.
What I did not foresee:
-Yashin having 28 points in his first 22 games of the season.
-Jason Blake, the speedster, having 27 points in 26 games.
-Vik Kozlov has 20 points in 26 games.
-Canuck fans won't appreciate this: Richard Park, who I miss in Vancouver, has 10 points in 26 games, which is on pace for 31 points, and is a defensive genius right now. His potential 31 points would nearly double his points total from last season in Vancouver.