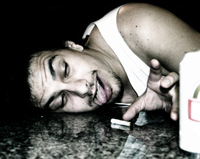 A rare trip east (maybe the closest they get to the NYC metro region in fact...and I can't go because I need to find a damn xmas tree. Ugh) brings the Canucks face to face with the wily Bruins. Both teams are quite similar: each 'reloaded' in the offseason (Chara/Luongo respectively), both are 5th in their respective divisions and both are on the outside looking in towards the playoffs. In contrast, both are coming off of different outings; the Wild smacked the Canucks around to the tune of 5-2 while Boston kicked Ottawa around 7-2.

Three things stand out to me for this evening:

Seeing how Boston may light up Slippery Sabby (did VCOE/C&B ever come up with a name for him?), I'm going to just forgo an actual prediction and, rather, suggest tips for how to treat your bartender with care so you can get nice and liquored up to the point where you can't actually decipher the numbers on the scoreboard (and that, my friends, quite possibly is a good thing).