Share All sharing options for: Roenick up sh*t creek? 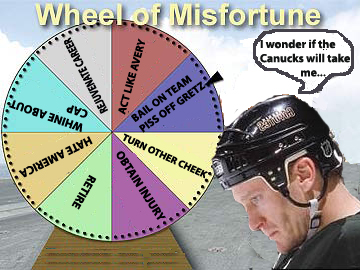 Ah, news about someone screwing up in Vancouver who ISN'T a Canuck! Leave it to Roenick to be the center of controversy. Roenick was scratched from Tuesday night's game against the Canucks for what was believed to be a back injury, even though Roenick felt that he was ok to play. But rather than stay at GM Place, JR left the premises and went to a restaurant to eat dinner and watch the game on TV. Taboo I suppose.
Wayne Gretzky was not impressed.

"I treat players like men and they should act like men," Gretzky told the Arizona Republic. "JR, all and all, has been pretty positive. But the reality is, last night he made a mistake. There will be ramifications for what happened."

Roenick has since met with Coyotes' GM Mike Barnett and Gretzky to apologize for his actions. But then he contradicted himself in the Arizona paper, saying:

"I was at the game for part of the game and then I went for dinner," Roenick told the newspaper. "I don't think there is anything wrong with going and having a nice dinner, having a beer and watching the hockey game. I don't know why everybody is trying to create a stir or create a controversy."


Whatever. Roenick was obviously upset with Gretz's decision, and probably frustrated with how things are going with the Coyotes. Roenick has also been spending alot of time on the 4th line. You know the proud and cocky Roenick couldn't stay on the straight and narrow for too long.
It's a far cry from what he was saying when the Coyotes signed him in July.

"I'm thrilled to be returning home to play for the Coyotes. I have a lot of great memories from my five years in the desert and I'm looking forward to having a great season and help lead our team to the playoffs.
I'm hungry, I'm focused and I can't wait for the season to begin."


Too bad that isn't going to happen. And now Gretzky has another headache to deal with. That is the risk of signing a guy like JR.
JR has one goal in 28 games. He has been scratched from 4 of the last 6 games. Hence the frustration.
He is telling the media that he will retire after this season.

But don't belive what JR says. Remember, in June he said he was going to play for a Canadian team this year. Sure.
But at least one thing he said today made sense:

"The way it seems to be going right now, I don't think anybody would want to give me another chance to tell you the truth."


At least, not anybody with a brain in their skull.