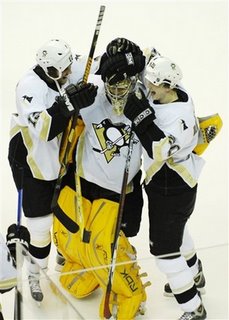 So who is better, Alex Ovechking or Sidney Divesby? Answer: Evgeni Malkin! Alright, I'll stop kidding around. But with all the hype surrounding the rematch of the 2 new stars, Malkin pretty much stole the show.
What an amazing game. By the 5:55 mark of the 2nd period, it was the Ovechkin/Chris Clark show, and it was 4-0 Caps. By the end of the 3rd period, it had become the Malkin/Crosby show and the score tied at 4-4. The Caps have not blown a 4 goal lead in 15 years. Ouch.
You could really see Malkin get stronger as the game went on, and he became a force. He could have been a goat. With 3 seconds left in the 3rd and the score tied, Malkin charged down the right side with the puck and (a la Bertuzzi) elbowed a Caps defender as he went by him, putting the Pens down a man in OT. But they killed that off, and survived long enough to go into the shootout. There, Malkin scored on his attempt, the game winner.
A couple things:
*I am jealous of the action that takes place in the Eastern Conference. Suddenly those games are IMO better than the West. Tonight's game had everything in it: superstars, goals, hits (Jarko was at it again), fights (Jarko fought well while he was being jerseyed), great saves, OT, and a shootout.
*Where was this Ovechkin when he played in Vancouver? He was dominating on the ice as well throughout the game. His reaction after he scored his shootout goal was hilarious. His reaction on the bench after Brooks Laich scored was hilarious. Hell, all his reactions are hilarious.
*Crosby was held well in check tonight by the Capitals. They didn't give him alot of room. Oh yeah, and he's also a whiney, diving little puke....who is an amazing talent. At least he has alot of passion for the game, I'll give him that.
* Malkin is the opposite. He is a hard-nosed power forward, and one tough SOB. I enjoyed seeing him smiling on the bench during the shootout and wearing his helmet backwards like his team mates were. He's having a great time isn't he?