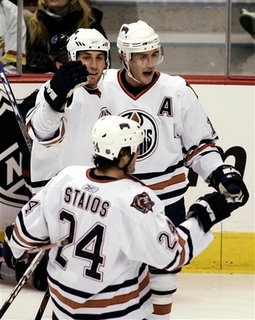 Ok, parents put your kids to bed, because Zanstorm is about to LOSE IT!!!
What the fuck kind of game was THAT!!!???? The Oilers have beat the Canucks 4-0 tonight and it was the most bogus piece of shit game I have seen all season! The Canucks were controlling this game in the first period, until Shawn Horcoff scored the flukey of all fluke goals on the Oilers' 2nd powerplay to put the Oilers ahead early, and really seemed to deflate the Canucks at that point. Then, the Canucks looked completely impotent offensively. Dan Tjarnqvist scored a pinball goal off Morrison's skate early in the 2nd period and as Canuck fans...we knew we were screwed because the Canucks don't score many more than 2 goals per game.
With momentum completely in the Oilers' favor, Lupul scored a beauty with a wristshot less than a minute later, as Horcoff was doing the 'Ryan Smyth' in front of Luongo.
Forget about it. The rest was academic. Burrows and Daniel Sedin had disallowed goals, but those were besides the point weren't they??!!
Fuck it. What a lousy game.
Side notes:
Roloson is a puss. A diver. I don't like him. He should win an academy award for falling over when Daniel Sedin 'interfered' with him. Roloson kisses referee ass, no doubt!

1. Dwayne Roloson. A shutout, nonetheless. He was stable, but is mentally UNstable.
2. Shawn Hor'coff' (cough cough hack hack)
3. Jan Bulis- Fuck you Oiler fans!! Torres shouldn't have been a star.

Hey, maybe I'm drunk right now.....but I must say, Jan Bulis and Trevor Linden were the best Canucks tonight.
Luongo was NOT to blame for this loss.
Tyler Bouck, you are one brave muthafucka for challenging Matt Greene, but DON'T ever try that again..ok??
What did this piece of shit loss do? It put the Canucks 3 points behind the Oilers for 1st spot in the Northwest Division. The Canucks will now have about 4 days to think about this stupid loss, and then play the Hurricanes on Friday. Not good. This game was a must win in certain aspects. However, the Oilers will get a stab at the Hurricanes before the Canucks do on Wednesday. If you are a Canuck fan, you SHOULD be
cheering for the Canes in that one, right?!