Oh no, Ozo put on waivers

Share All sharing options for: Oh no, Ozo put on waivers 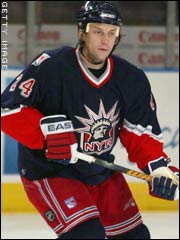 The Rangers have put 34 year-old Sandis Ozolinsh on waivers today. In 21 games this season, Ozo has 3 assists and is a -8. This is the last year of his contract. This does not bode well for him. At $2.75 million, who is going to take a chance on him? Ozolinsh comes with a bit of baggage.
Last season, Ozo spent time in the NHL's substance abuse program while being out with a knee injury, and was busted for impaired driving as well. It really is unfortunate. To Ozolinsh's credit, he won a Cup with the Avalanche in 1996, and was a dominant offensive defenceman during that run. The same can be said about Ozo's value to the Ducks when they went to the Cup Finals in 2003. After he was traded to the Rangers by the Ducks last season, he achieved 14 points in 19 games. All looked well.
Ozo's point totals this season put him on pace for the worst offensive performance of his career. And offense is what matters for him because he is a -33 in his career. He gets caught up ice alot. This stat, combined with fear of signing a defenceman on the decline at $2.75, and the personal baggage could mean the end of Ozolinsh's NHL career.
And that is too bad. I have always been a fan of his. I even own an Ozolinsh Avalanche jersey....
What team has the need for an offensive defenceman and can absorb that kind of a contract?
Washington? I'd like to see him play there. Beyond Brian Pothier, there aren't a lot of Caps' D-men that can score. They have the most available cap space in the NHL.
Atlanta? They don't get alot of offence from their defencemen. So far Greg Devries leads in that category with 11 points. The Thrashers have used up about $41 million in cap spending.
Chicago? Duncan Keith is their highest scoring D-man with 15 assists. The Hawks are at the $38.9 million cap mark.
Edmonton? They have room under the cap. I think Ozo would fit in well there as well, especially with his strengths with skating the puck up the ice.
St. Louis? Eric Brewer is their top-scoring D-man with 8 points. The Blues powerplay could use a shot in the arm, quick.
If all else fails, he could get signed by Phoenix, which already is a circus!