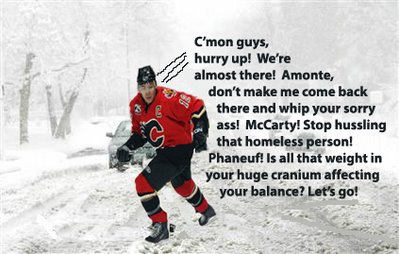 For the second straight day the Denver area was motionless. City streets were empty, nothing moved at the airport but the thousands of stranded travelers, long stretches of highway were impassable, even the mail couldn't get through after a powerful blizzard dumped two feet of snow on the region.
More than 30 inches of snow fell in the mountains, and up to two feet fell in the Denver metro area Wednesday and early Thursday.

The game will be rescheduled at a later date.
In the meantime, anyone who can contact any of the Flames players somewhere in the storm, please call Darryl Sutter. His usually expression-less face is looking a tad worried. He said he is concerned about his players being caught in a whiteout surrounded by a bunch of gun-toting Americans.