Merry Christmas to all

Share All sharing options for: Merry Christmas to all 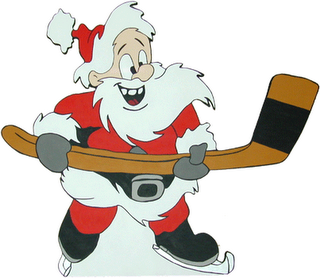 I've only been blogging about hockey since July. It has been a fun ride so far. Ever since I was a little punk, I loved to write in a journal about hockey, keep scores, collect stats and compare them from year-to-year. I had a great friend in those days who I played Blades of Steel with for I don't know how many years straight. When we weren't doing that, we were playing hockey with our siblings on the pond, the driveway, or upstairs at the neighbour's house, trashing everything in sight.
That love for the game has carried on to today. Now, I can put my thoughts on a blog and share it with others, rather than in a journal hidden in my bedroom. So far, I've enjoyed it.
I've also enjoyed meeting people along the way, and would like to thank them for their company:
Temujin, who I've known for a long time, got me into blogging in the first place. I first wanted to blog after reading his.
Alanah's VCOE was the first hockey blog I ever checked out. That started something in my cranium.
Sleek's BOC was the second hockey blog I read. What a character.
I think I first ran into Reality Check at the Acid Queen's blog, in the comments section. Sweet Tea was another one of the first blogs I read because the Canes had just won the Stanley Cup, and I wanted to read a fan's perspective.
For the record, and in my opinion, Reality Check has writing skills that are nearly second to none. His historical insight and crass humor are addicting.
Tapeleg was also another inspiration. We suffered the blogger growing pains at the same time. TL inspired me to learn HTML and I copied a few of his ideas because they were so inventive for hockey blogging.
These people were supportive at Waiting For Stanley's beginnings and I want you to know that I appreciate it.
But that's not to say that I am forgetting about everyone else. For all of you that I haven't mentioned, the ones that I've met in and through the hockey blogosphere, the ones who visit here and read these ramblings, thank you very much.
Next year, I hope to keep the pace up as much as possible, and to especially develop more of an edge. We all need a little controversy.
MERRY CHRISTMAS TO YOU ALL! ENJOY THE HOLIDAYS!