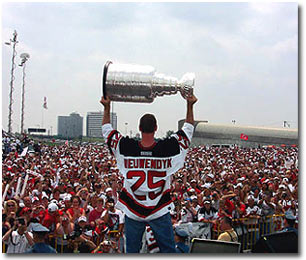 Joe has finally thrown the towel in due to recurring back problems.
''This game has been great to me,'' said Nieuwendyk. ''I am forever grateful to all those players, coaches, general managers and everyone that I have been associated with throughout my playing career. I have had a lot of fun playing this game, but it was time for me to make this decision, as it was in the best interest of myself as well as my family.''
''I have the reached the stage where structurally my back isn't going to get any better. It's not the way I intended it, but I have to be realistic as well,'' Nieuwendyk said.


Joe leaves the NHL with an impressive resume. He had 1126 points in 1257 games. He won the Stanley Cup with 3 different teams: Calgary in 1989, Dallas in 1999, and New Jersey in 2003. He won the Conn Smythe trophy as the playoff MVP in 1999. I can still remember that playoff run. He was dominant, scoring 21 points in 23 games for Dallas, and scoring multiple winning goals. The 21 points was even more impressive because Dallas was so stingy on defence and didn't score alot of goals.
Nieuwendyk retires at the ripe age of 40. Good luck Joe. It's been fun watching you!

Should Joe go into the Hockey Hall of Fame? I think he should. Here is what Sportsnet's Ray Ferraro thinks.