Share All sharing options for: The Jan Bulis Bandwagon 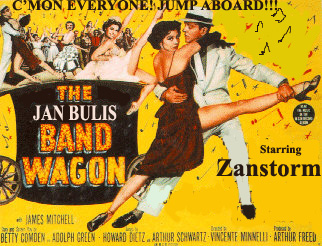 Alright alright. So Jan Bulis played a good game last night. I will give him some kudos for that. But more importantly, Bulis could stay with the Sedins even tonight against Calgary. Gad, he sure is inconsistent though, but at least the reading has dropped on the Suckometer on our sidebar.
I taped last night's game because I had to go to a company dinner. Watching it on tape today, I can't believe how exciting it was. The Canes came out with guns a-blazing but Luongo held them in there. It was a knife in Carolina's heart when Bulis scored the first goal of the game on the Canucks' first powerplay, after the Canes couldn't capitalize.
The momentum that the Canucks got from that lasted pretty much all the way through the 2nd period. Eric Stool could have changed that on his penalty shot opportunity, but Luongo said 'suck it'. Even a fan got on tv after that chance and was raising his middle finger at Staal, telling him he was #1. JJ, was that you?! I kid.
But the amazing part of this game was the 3rd period when the wheels fell off. After 'Jovocop 2' Yanic Tremblay scored the 3-0 goal, the Canes woke up, and scored immediately afterward, on a goal by Craig Adams. Then the players got stupid, or the refs got whistle-happy, because there was a butt-load of penalties that ensued from both teams. Eric Cole scored the first Canes PP goal in over 5 games to make it 3-2. The Canucks couldn't beat Cam Ward.
By the time Mike Commodore 64 scored a flukey one on Bobby to tie it, it was a scrambly yet exciting game. The Canucks never really lost their composure after that, like they would have in the past. Instead, they worked hard going into OT and persisted.
When Scott Walker put the puck over the glass and got the delay-of-game penalty, the Canucks capitalized and got a well-deserved 2 points. Hey, was that winning goal sweet or what? The Sedins really got better as the game went on.

* Uh, did anyone foresee Tremblay doing this well? His passes were tape-to-tape and his powerplay presence was golden.
* Luongo played super in this one. Commodore's goal was a fluke. If it wasn't for Bobby, the Canes would have been up 3-1 after the first.
* I liked the Canucks presence in front of Cam Ward tonight, especially Bulis and Chouinard, who both got powerplay rebound goals.
* This fucking goalie interference call has to go IF the goalie is outside the top of his crease. That call on Cole was terrible! But it was poetic justice for the Nucks I suppose.
* Right now, if I could pick one player to play on my team, it would be Eric Cole. Cole is a hard-working, skilled superstar, and is emerging as one of the greats in the league. Gad, he was good last night.

AH! THIS is why the Canucks got some goals last night!