Share All sharing options for: I can't get no...Mats-isfaction 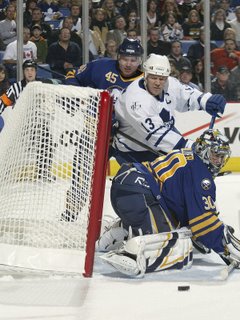 There is a strange situation going on in Toronto and I'd like to toss a few stats at you to illustrate my point. For whatever reason, the Leafs have been on a losing skid ever since Mats Sundin returned to the lineup from injury 3 games ago. In Sundin's absence nearly the entire month of November, the Leafs fared pretty well, and players like Nik Antropov emerged, like yours truly predicted.
To be more exact, the Leafs played 8 games without Sundin, won 5 and lost 3. They scored 32 goals (4 goals per game average) and allowed 20 goals (a 2.5 goals per game average). Since Sundin has returned, the Leafs have lost 3 straight games, scoring 2 goals and giving up 12! The offence has dried up and the defence is sagging. What the hell is going on in T.O.?
In my opinion, and this is a crapshoot, in their captain's absence, the Leafs got huge efforts from the whole team to make up for his loss. That was pretty evident.
When Mats returned, perhaps players lost some of their motivation to perform as well as they did in his absence. What else would cause this? Before they know it, they are on a 3-game losing skid and are losing their confidence.
Honestly, I don't see this staying this way for too long. The team will adapt to having Mats back in the lineup, get a win finally, and settle down a bit. If not, the Leafs could find themselves out of a playoff spot sooner rather than later, and I could find myself turning to Captain Morgan's to ease my grief!