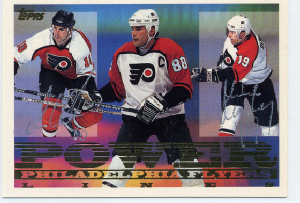 There are only three "legion of dooms" I know of - one was Superfriends related, one was two hilarious looking wrestlers in the WWF and the last (one that was, you know, REAL) was the name of the top Flyer line during the short-lived period of the 90's when the Flyers were great. Their LOD included the manchild Lindros centering John LeClair and Mikael Renberg which existed a bit longer then the politically incorrect "twin tower era" of Lindros and Primeau, but at any rate, they were great line of guys all more or less in their prime.

Unfortunately, the Flyers LOD never lead them to the Promised Land. So what of them now?

Eric "Lex Luthor" Lindros - A couple concussions + a collapsed lung / daddy yelling at trainers = Bob Clarke wants you dead. And by dead, he wants you to suffer in the purgatory known then as the Rangers. Lindros briefly flourished when he centered a fun line with Theo "One for the Road" Fleury but he got another concussion eventually and was told to retire. And by retire, that meant go to Toronto where Lindros would be permitted to extend his time in purgatory while keeping his injury streak going with a phantom wrist injury. He was last seen somewhere in Texas where that wonky streak of his just keeps going.

Mikael "Sinestro" Renberg - The soft cuddly one of the three, Mikael had the dubious honor of being moved for perennial underachiever Chris Gratton before coming back two years later with little success. He would eventually be traded to Phoenix for Rick "SnakeEyes" Tocchet before stopping over in Toronto for a three year layoff before his return to Sweden where he is today (local legend says if you say his name three times in the mirror at the stroke of midnight, he appears behind you with a plate of cookies and a glass of milk).

John "Black Manta" LeClair – The longest to stay on the Flyers, LeClair was a rock until the lockout and the new CBA saw teams shed excess salary and old players as a nice way of saying "hey thanks now off to old folks home with you". LeClair, not one to take such evil words lightly, responded by signing cross state rival the Pittsburgh Penguins. Sadly, LeClair had no idea that the Pens still had one more giant year of megasuck in them before turning the corner so LeClair’s stock didn’t exactly skyrocket. In fact, it’s plummeted to the point where any GM, for the low low price of 125 one dollar bills, can now have a LeClair all to themselves!

I don’t know if LeClair is that bad anymore, but I have to assume he is if that’s the going rate now. I would have suggested the Canucks take a run at him for scoring purposes, but it looks like they’ve turned a slight corner in recent games.

As for tonight…who is this Iginla character people keep falling over themselves about? Never heard of him…sounds like a flash in the pan. A one and none kind of guy. No need to worry about him. And Kiprusoff? Sounds like a fabric cleaner. Another guy riding some sort of hot streak? Bah, nothing for the likes of the vaunted Bulis and shapeshifting Sedins to worry about. The media won’t talk about it, but you heard it here…the Sedins can bend time with their mind. However, being Swedish, they know better than to abuse this power. We could all learn from their example.

Oh yeah? A prediction? 3-2 Canucks. The Flames come on strong at the end, but Luongo closes the door and Daniel, Bieska, and Kesler do the rest.