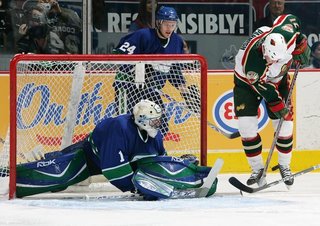 As fans, we put alot of pressure on the players on our team, especially goaltenders and even more so, big-money goalies. You have to think that Roberto Luongo is feeling the pressure in Vancouver, a much more hockey-mad community than Florida was, where we will scrutinize his every move. We expect great things from a guy who is eating up alot of our cap space.
So let's be realistic. Luongo has struggled from time to time. I've verbally hacked him on occasion. But I think Luongo is gradually getting better, and adjusting to his coach's and team's style. So it seems. His stats, generally, are decent compared to the rest of the league. Here is how he lines up.
(Goalies who have played in less than 10 games will not be counted)

I think his save percentage needs to get better, and probably will.

Of course, alot of goalie stats reflect how the team plays in front of him. In the past 3 Canuck wins, here are Luongo's average stats:

God-like in nature, huh? In Luongo's defence, he was superb in the Canucks' last 3 wins. More so than usual. He looks comfortable in net right now.
What baffles me, from what I saw, was that CBC and Sportsnet never recognized Luongo as a star of the game in any of those 3 games. At least a couple of us bloggers know what is going on! I wonder if Luongo makes it look so easy sometimes that he gets overlooked.
Anyway, my hat is off to Luongo right now, and I hope his success continues.