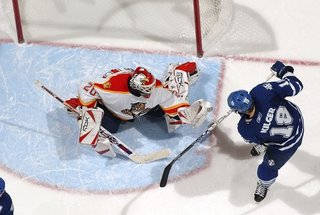 TORONTO (CP) - Gary Roberts plays well at both ends of the ice, gets named first star and is cheered heartily by the fans at Air Canada Centre.

Ed Belfour makes big saves, keeps his team in the game early and helps it to a big victory.

The storyline was all too familiar for the Toronto Maple Leafs on Tuesday as they watched a pair of former teammates do what they do best.

Belfour made 33 saves in his return to Toronto while Roberts had two goals as the Florida Panthers handed the Maple Leafs an ugly 7-3 loss.

Know what? If Gary Roberts and Eddie Belfour want to have some fun and beat up on the Leafs, I am COMPLETELY FINE with that, as I am a big fan of both players.