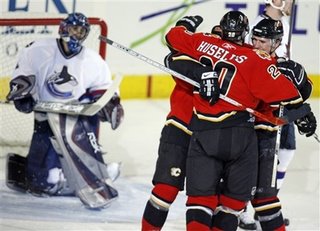 There isn't much good to pull out of this loss except that the Canucks showed alot of heart in the 3rd period and could have tied it. But Alex Tanguay obliterated any hope of that when he scored the empty net goal with 36 seconds left.
The Canucks' powerplay is still getting better, as they converted 2 out of 5 chances with the man advantage. Jan Bulis was parking his carcass in front of the net on the PP and scored another goal tonight. Trevor Linden, who has spent time in Viggy's pooch house recieved more icetime tonight (12:27), especially on the powerplay.
But it is hard to find many more positives for the Canucks, except for Kevin Bieksa's 2 point night and 5 shots on goal.
Wasn't this the Flames team that couldn't score any goals earler in the year? You couldn't tell lately. Iginla, Tanguay and Langkow are connecting and the Flames are rolling, with their 9th straight win at home. The trio had 3, 2, and 1 points respectively tonight. Kristian Huselius has a knack for scoring highlight reel goals, and Matt Lombardi was a force out there tonight.
The Flames can protect a lead when they get ahead. The were suffocating the Canucks offence most of the night and not giving them many quality chances, which is what the Canucks can do nowadays as well. The Flames are better at it, and are a better team overall.
We should see the Canucks battle it out for the 8th spot for the rest of the season, and it is going to be tough. They still hold on to 9th spot, with the help of the Kings, who beat the Avalanche tonight. But I'm thinking that the Black Hawks are going to in the mix for the final playoff spot as well.

Did I mention that Luongo got pulled? The fucking sky is falling!