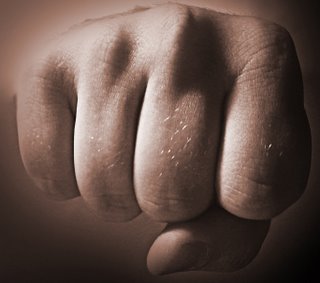 I often find myself so annoyed at someone or something that I simply cannot cognitively process the information and condition my vocal chords to emit a sound in the accepted enunciation of curse words fast enough to adequately exemplify the accurate level of my anger.

Anyway, the latest reason there's a hole in my apartment wall (hi neighbor!) is this authorless gem of an article reviewing the NHL off-season. Let's review their take on the two Vancouver acquisitions they deem are ‘in limbo’:

Luongo has lacked consistency, while Bertuzzi's back is wonky. Krajicek vs. Allen is a wash.

I can accept Krajicek & Allen, but if the entire point of this article is to see who the early winners/losers of the off-season are, how is this not a slam dunk for the Canucks? We can assume Bertuzzi was going to be injured wherever he was and the idea of the same Cloutier-backed Vancouver squad without Bert seems awful in the ultra-competitive Northwest division. So the fact Luongo has played 25 games (over three times as many as Bert) would suggest to me that Vancouver has won this trade…completely…at this moment…period! Not to mention that Luongo is 12-11-1 which would suggest that, aside from a blowout here and there, he's consistent at keeping Vancouver in most games; they’re near .500 because they can’t score, not because of Luongo’s play. Go find me a GM who would rather have Bert on the sidelines for what could be half the season instead of the option of using Luongo for 60 minutes every game.

Pyatt has scored goals when on a line with the Sedin twins, but where would he play in Buffalo?

This could be the worst reasoning I've seen a long time. Pyatt is on pace for a career year; he has more goals now then he did all of last season and is tied for the lead in team power play goals. Outside of the Sedins and Naslund, he's been one of the few offensive threats. But the Pyatt acquisition is ‘in limbo’ because Buffalo is stacked? Pyatt would still be 10th in scoring on the Sabres now (!); you think Regier would rather be icing Stafford or Mair ($675,000) if they could add another scoring body like Pyatt for $700,000? Well, shit, if that's your logic you better go back and review every single off-season acquisition: Shanahan is doing great in New York but Detroit has a better record so that acquisition is in limbo. Besides, Detroit has a youth movement on their hands and Zetterburg, Holmstrom and Maltby are at LW so where would Shanny play anyway? If that makes any sense to you, then fine, Pyatt's in limbo.

Under their ‘loser’ moves, they do score some points by noting Cloutier is basically terrible and that Carter would be better almost anywhere except the Blue Jackets fourth line (something Hitchcock recognized between servings of buffalo wings), but they seem to be perfectly happy with both the Bulis and Chouinard signings. Christ, at least Carter plays whereas we're paying a million dollars plus for Chouinard to warm a seat (or miss beautiful 2-on-1 passes a la the Anaheim game). And Bulis, at this point in the season, defines "bust": He was bought in to replace Carter on the Sedin line, then he played with Naslund, then he played with Morrison, then he played with Vigneault's kittens, then he got free happy meal coupons and still nothing. Bulis has the same amount of points as Carter and, yet, Carter makes the loser list?