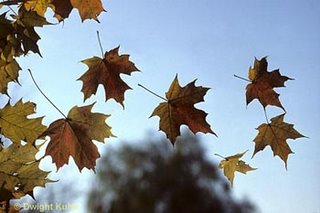 The recent losing streak of the Leafs can definitely be attributed to the return of Mats Sundin from injury. The team just hasn't been able to play a full 60 minutes ever since then, and the goal-scoring has dried right up. Here is what others are saying:

Don Cherry, who was right all along:

"I said before, (referring to when Sundin first came back), DON'T PLAY SUNDIN. Wait until you (Leafs) start losing, and then bring him back like a hero."

"I don't think people necessarily appreciate sometimes the stress the players are under," Maurice said. "And listen, I know it is a game and I know it is hockey, and not life and death. But they are performers and they perform in front of crowds and they have high expectations, especially in this market.
It can't be the heel of your boot every day."

Maurice allowed the Leafs to play some 3 on 3 pond hockey style so they could have a little bit of fun and ease their minds.

I've decided I'm only going to watch the first two periods of Leaf games. Just like the 23 guys on the club, I'll celebrate the win at the 40 minute mark and then go do something that doesn't involve hockey.

Because by definition, a team is a collection of multiple personalities contributing to the fortunes of the collective. So that means all Leaf problems are collective action problems, issues that cannot be pinned on a sole non-contributor, particularly with regards to the skaters on a team. At least with goaltending, one specific person is the guy who let in a bad goal, but even then, goalies are usually playing poorly at least in part because they are the victim of defensive breakdowns by the players in front of them.

I think that Ninja sums up Leaf fans and players' feelings right here.

And PPP at the Battle of Ontario put together a hilarious post called 'Baking with the Maple Leafs.' It's a must read indeed.