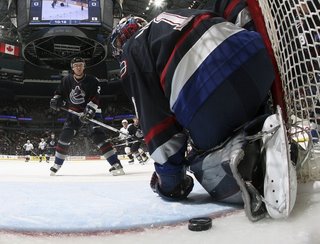 In a tight, hard fought game, the Ducks capitalized when they needed to in the 3rd period to bury the Canucks. "When they needed to" meaning when the Canucks decided to take a barrage of penalties in the 3rd period after tying the game at 1 after Alexander Edler scored his first NHL goal. Ryan Getzlaf scored his 11th goal of the season while the Ducks were on a 2-man advantage at the 12:26 mark of the 3rd period and the Ducks closed the door from there, making the Canucks' offence look impotent. The worst part about that 2-man advantage was that Roberto Luongo, who was playing sharp all night, had the puck roll on him a bit when he shot the puck out of the zone. The puck went too high and over the glass, and a delay-of-game penalty was called. The rest is history.....and unfortunate.
The Ducks played well defensively, as did the Canucks. It was a boring game to say the least, and really could have gone either way.
We are still left with questions of the Canuck's offensive ability, but alot of that can be attributed to the stingy Ducks D last night. But you know, sometimes you have to bury your chances when you get them. I also noticed that the Canucks were getting a little too fancy on their 2 powerplays (the Ducks had 7 powerplays by the way) and in the Ducks' zone when maybe putting more pucks on the net would be a better idea.

I am not going to pick on Bulis as an individual this time, but judge the team as a whole. Jan wasn't any worse than anyone else last night. 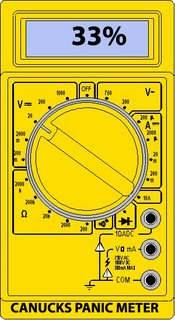 There isn't any reason to panic yet. The Canucks are drifting in and out of a playoff spot recently.