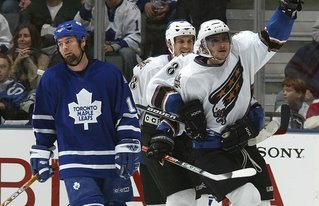 These are very trying times to be a Leafs and/or a Canucks fan.
Both teams are having a tough time showing any consistency.
The Leafs' woes continued tonight at home against Washington. They took buttheaded penalties in the 2nd frame and the Capitals, on goals by Ovechkin, Semin and Zubrus, made them pay. The Leaf unfaithful boo'ed them off the ice at the end of the 2nd. So did I from my couch. It's frustrating to watch this team fall into their very familiar undisciplined style of play. Truth be told, it's been going on for years in TO. Sundin and McCabe were the usual suspects tonight. You can equate it to the Canucks having Bertuzzi and Jovo in their lineup over the past few years. Boneheads..., especially McCabe.
When Sundin tried to redeem himself in the 3rd period, scoring 2 consecutive goals, including one on a penalty shot, it was just too late. Ollie Kolzig was absolutely solid in net. Apparently he loves playing in Toronto.
To compile another problem, the Leafs were without 3 regulars tonight: Peca (leg), Ponikarovsky (separated shoulder), and Wellwood (hip flexor). The news on Peca today was of the shitty variety. He will miss 3-4 months after breaking his leg and suffering ligament damage after a knee-on-knee collision with Jim Vandermeer. The Leafs won't miss Peca's scoring, because he doesn't do much of that. But they will miss his play on the penalty kill and faceoffs. His leadership abilities cannot be denied either. Bottom line is, he may never play in a Leaf uniform again, as his contract expires at the end of the season. Dammit...The all too familiar Peca leg injury...

"Peca is arguably one of the best defensive forwards in the league, but a lot of teams fight through injuries," Sundin said. "We're a bubble for a playoff spot. We need to have more desperation. We need more urgency."


And stop taking so many fucking penalties, you morons! Soon I'll be walking the streets wearing one of these: 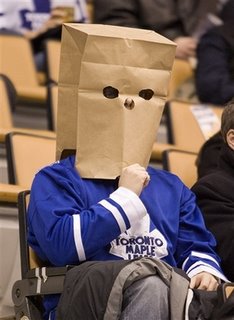 The loss drops the Leafs into 11th spot in the East, only one point ahead of Pittsburgh and Tampa Bay..
*pounds a bottle of Captain Morgans*