Canucks/Coyotes preview: Return of the Cop

Share All sharing options for: Canucks/Coyotes preview: Return of the Cop 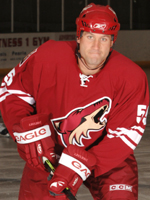 There's nothing like watching a former superstar player come back into town after he's been moved.


I don't like how NHL.com mentions for tonight's preview that "Seeing the player who used to anchor their blue line return in an opposing uniform for the first time also has to hurt." Fuck that. Why, because of his superstar status? Does our blueline need an anchor right now? Fuck no!! The Canucks D-men are an impressive bunch. IMO, they are so deep on D right now, that Sami Salo could take a hike next year, and a guy like Coulombe or Edler would replace him no sweat.
Do we really miss Jovo because he made us successful? In his last 3 seasons with the Canucks, he missed about ONE season's worth of action. He was also prone to taking boneheaded penalties. Sure, he was great on the rush and piled up decent point totals, but how many times was he caught up ice creating odd-man rushes the other way?
Am I being negative? Even if Jovo has the game of his life tonight and piles up 3 points, remember that he is being paid $6.5 million per year in Phoenix, and that we can build our team throughout in time without paying a guy like Jovo that much. Remember Jovo for the good times he had in Vancouver, but please don't wish that we still had him and his inflated salary while the Canucks are struggling. Because we really don't.
Alright, enough of that.
The Canucks lost their last outing against Calgary on Saturday. Given that they are beginning a trend of win one and lose one, we should see a win tonight. If Phoenix beats them, there will be despair.
The Nucks' pwerplay is coming alive all of a sudden, and they are 6-for-14 in their last 2 games. Hope that continues! Unfortunately, like the Sun is saying, the Canucks' defence has disappeared lately. They have allowed 12 goals in their last 3 games, which is quite unlike their usual stingy selves. They will tighten up tonight is my guess.
Will Sabourin get the nod?
The Coyotes are not sucking like they had earlier in the season. After losing to the Sharks last night, they have won 4 of their last 7. Gretzky looks like he has been sleeping a little better lately.
My prediction: 4-2 Canucks if Luongo plays, and 4-3 Coyotes if Sabourin plays!