Share All sharing options for: Canucks won??? I watched UFC 66! 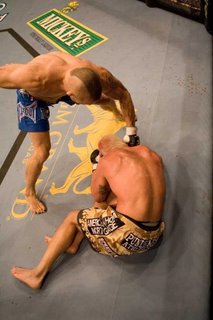 Unusual for me to skip a Canucks game, but there were 2 dudes that had called me up yesterday afternoon and wanted me to order up the UFC 66 pay-per-view. I was willing to oblige, even tho the start time of the PPV was the same time as the Oilers-Canucks on CBC. What ended up happening was a classic UFC show and a Canucks killing of Edmonton. Every time I switched the channel to the Canucks game in between fights, the Canucks had scored again and we had just missed the goal. But it didn't matter.
The UFC PPV didn't disappoint. Even though the octagon mat was nearly blood-stainless, the fights were all entertaining. The headline bout between Light Heavyweight champion Chuck Liddell and cocky challenger Tito Ortiz was intense. Liddell knocked Ortiz senseless in the first round with a hard punch to the side of Ortiz's head, but Tito recovered. The second round was mostly in Ortiz's favor, as Liddell looked cautious. But in the 3rd round, Liddell found his form again, and caught Ortiz with another blow to the side of the head while Ortiz was down. The ref stopped the match when Liddell was pounding on Ortiz while the latter was laying on the mat seemingly at Liddell's mercy, as the picture shows. This was controversial IMO, because it seemed that Ortiz was not 'out of it', and was covering up just fine. But the ref had other ideas.
A great PPV. I am getting more hooked on UFC by the moment. Last night's PPV was anything but boring, as every match was concluded without a judge's final decision. I don't think that any match went beyond the 3rd round, which from what I hear, is a rare occurence!
Ironically enough, at one point between fights, I switched the channel to the Canucks game between fights, and there was new Canuck Jeff Cowan kicking the shit out of JF Jacques! Nice! Brawling is back in Vancouver!