The Canucks this Week

Share All sharing options for: The Canucks this Week 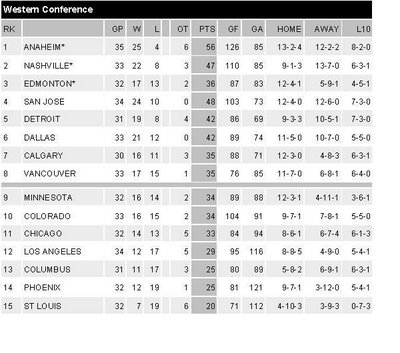 The best OR the worst can happen to the Nuckleheads this week. Typically, they are somewhere in between, as in: win a few, lose a few. However, they are currently on a 3-game winning streak, and it couldn't come at a better time. The West is even tighter now. The Black Hawks are the hottest team in the West, (6-1-3 in their last 10), and are quickly approaching the 8th spot that the Canucks now hold. It's a damn dog fight to say the least.
For the time being, the Oilers are in 3rd in the West because they lead the Northwest Division. But the Flames and Canucks, in 7th and 8th spot respectively, only trail them by 1 measily point. The slumping Wild trail by 2 points, and are in 9th spot and falling.
Which is what makes the Canucks' schedule even more important this week. They will play the Wild in Minnesota on Tuesday night. The Wild will be out for blood after their loss to the Nucks on Saturday. Then the Canucks travel to the East coast to play the red hot Bruins on Thursday. The next evening they play in Columbus, another team on a roll. This will not be an easy week at all. I say they will finish this week 2-1.
Let's take a quick look at the surrounding teams' schedule heading towards Xmas.
Oilers: play Colorado Tuesday night, Phoenix on Thursday, and Dallas on Saturday. That's not too tough. I think they can win all 3.
Flames: play Los Angeles Tuesday night, Colorado on Thursday, and San Jose on Saturday. I think they will finish 2-1 after those 3.
Wild: play Vancouver Tuesday night, Detroit on Friday, and Detroit on Saturday. Uh-oh. I think they will lose all 3.
Colorado: plays Edmonton Tuesday night, Calgary on Thursday night, and Chicago on Saturday night. I think they will lose all 3.
Chicago: plays Nashville on Wednesday, Toronto on Friday, and Colorado on Saturday. I think they will beat the Avs, and then lose the other 2.

So, I am predicting not much change, except the Wild and Avalanche falling further down the standings.