Canucks, against you have I sinned!

Share All sharing options for: Canucks, against you have I sinned! 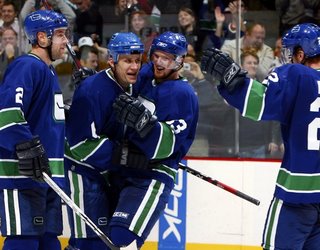 Call me Judas. Call me Chris Pronger. Call me a cheating spouse. I have sinned this past week. I have been a traitor to the Canucks cause, verbally bashing them when they were down on the road trip, and being a turncoat by putting a Black Hawks header on this site.
Oh Linden, please forgive me for hating you. You have been nothing short of inspiring in the past few games. Maybe you deserve to be on the roster after all. Maybe you shouldn't hang up your protective cup just yet.
Daniel and Hank, my apologies for disgracing you, my brothers.
Please welcome me, the traitorous bastard that I am, back into your fold. Extend your hand to help me back onto the wagon.

In all seriousness, last night's game was a beauty. We aren't used to seeing a 6-5 game on the West Coast this year. A couple of points about the game...


As for the header on this site, it won't always be loyal to the Canucks or Leafs. I think it will become more general over time.