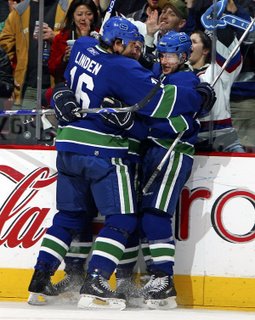 In a game that meant 1st place in the Northwest Division the Canucks made it count and beat the Flames in overtime, despite the fact that they blew a 5-3 lead early in the 3rd period. They held on, and unfortunately gave the Flamers 1 point in OT, but really, fuck it. They got a flukey goal from Salo in OT, that banked off 2 Flame defenders and that was the difference. Really though, the Canucks have been waiting for this kind of break for quite a while. Good on them. They won a game that matters, and have taken over the Northwest Division, putting them in 3rd place in the Western Conference.
* Matt Cooke had 1 goal and 1 assist. Good job!
* Trevor Linden should take the "C" right about now. He is playing with heart once again, where Naslund wasn't really a factor. Is Naslund hurt? Something is wrong with him?
*Kipper wasn't that good on Cooke's goal, but even Luongo wasn't any better.