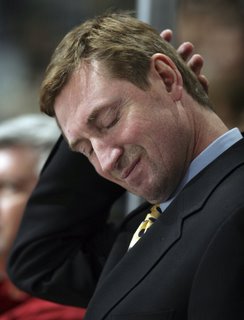 You almost have to feel bad for Gretzky when you see how dismal his team is, and the Great One's expressions of despair behind the bench. Last night, the Coyotes either looked tired, disinterested, or both. The Canucks raked them over the coals and made them pay for it. And Gretzky's hair got more grey.
In a night where Ed Jovanovski returned to GM Place, and was serenaded with cheers and boo'ing, it was defenceman Kevin Bieksa who stole the show. Jovo looked invisible and was completely ineffective. Bieksa was superb. The Bieksan one played 24:09, had 1 goal, 1 assist, was a +4, and had 7 shots on goal. Jovo played 20:11, had 1 assist, was a +1, and had 3 shots on goal. I don't remember any of those 3 shots because I was too busy admiring the Canucks dismantling the Dogs.
The other big story tonight was the coming-out party of the Canucks' offence. It's amazing how good the Canucks offence can look when they are playing without the weight of a piano on their backs. Even Trevor Linden looked about 10 years younger. Ryan Kesler was finally rewarded for all his hard work with a 2 point night (1 goal 1 assist).
Did anyone else notice how FEW penalties there were last night? (4 against Phoenix, 2 against Vancouver)
The Canucks could have won this one 9-2 if they didn't ease up on the Yotes in the 3rd. I was hoping they would keep scoring until Linden got one.
Speaking of Trevor, his ice time continues to increase: 15:06 last night. He has more jump lately.
Roberto Luongo was great, stopping 28 of 30.

Jan Bulis performance:
Pretty good game by Jan once again. I don't know why, but Vigneault has been starting him on the Sedin line and then slowly demoting him as the game goes on, even when it seems that Jan isn't playing any worse.