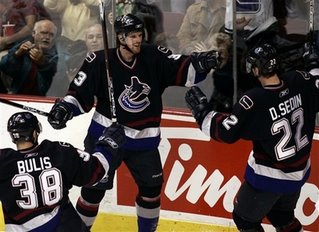 Unreal. That was a phenomenal game by the Canuckleheads. Despite a few defensive lapses, like Nazzy's bad D on Lombardi's goal and the odd breakaway chances by guys like Iginla, the Nucks read my memo and performed superb. Iginla, Tanguay, and Langkow were held in check for the majority of the night. ZERO points for all of them, 3 shots by Iginla, 2 shots by Langkow, and ZERO shots by Tanguay. Nice work, especially by Mitchell, who had the task of covering Jarome.
How was Bobby Lu? GREAT! Luongo stopped 21 of 22 Calgary shots, many of the spectacular variety. He was steady no doubt.
No matter what lady luck threw at the Canucks, like a disallowed goal because Burrows 'interfered' with Kiprusoff (a bogus call), the Canucks didn't lose composure and kept pressing, eventually being rewarded with a Morrison goal in the 3rd to salt this one away. What a sweet goal that was....a slapper to the top shelf after a feed from Cooke.
My mind is all over the place with this game...
Bulis stayed with the Sedins all night, for once, and played well all night.
Trevor Linden is really far out of the doghouse now. I thought he played alot more than the 11:19 icetime he got. Trevor is getting critical icetime on the PP even. Good for him.
I think Krajicek was an unsung hero tonight. He made a ton of key plays defensively.
You have to love the Canucks' penalty killing tonight, or love the Flames limp effort on the PP. Whatever. The Canucks killed 6 straight penalties in the 2nd period.
Both teams finished 0 for 8 on the PP.