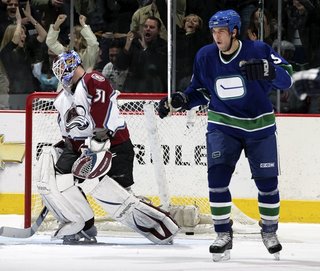 Bobby Luongo made 40 saves and Taylor Pyatt scored the winning goal at 7:36 of the 3rd as the Canucks pulled off a squeeker. Vancouver was outshot 41-24 in this one, and it looks like Luongo is finding his form. We know he likes (or is used to) a lot of shots and he got that tonight. Alot of those 41 shots were not quality chances though. I thought that the Canucks played well defensively and that the 41 shots against were a bit decieving. The Canucks really neutralized the Avalanche's speed game for the most part. The Avs' Kid Line, which destroyed the Canucks last time around, looked almost non-existent out there.
Beaner had mentioned that the Canucks coaching staff wanted Taylor Pyatt to stand in front of the net more, which he did tonight, and was rewarded with a tip in winning goal on the powerplay. The Canucks powerplay was 2 for 6 tonight, as Daniel Sedin also scored a PP goal in the 2nd period. The Avalanche were 0 for 4. haha
The win puts the Canucks back into 8th spot in the West, 1 point ahead of Colorado and Calgary. It also puts them 1 point out of top spot in the Northwest Division behind Minnesota and Edmonton. Yes, the Edmonton that got obliterated by the Blue Jackets last night. The same Oilers who lost Ryan Smyth to injury last night (fractured thumb).

1. Bob Luongo
2. Joe Sakic. Played very well, but Luongo robbed him on all chances
3. Trevor Linden. HNIC gave the 3rd star to Pyatt, but I'd say that Linden had his best game of the season, and was rewarded with more icetime tonight. 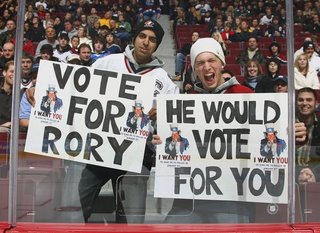 There is still alot of commotion about fans voting Rory Fitzpatrick into the AllStar Game in Dallas this year. This picture was taken at the game last night, and it really cracks me up. I'm gonna go now and vote for Rory, and so should you!