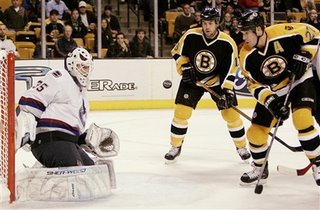 The Canucks ran into another hot goaltender tonight in Tim Thomas, and didn't capitalize on their chances, losing another road game.
This was another heart breaker. The Canucks shot themselves in the foot early, getting into penalty trouble, and taking 6 penalties in the 1st period to Boston's 2. Patrice Bergeron and Glenn Murray both scored PP goals in the 1st and made them pay.
From that point, until the end of the game, the Canucks outshot the Bruins 27-6. Many of the shots were lackluster, but when they were quality chances, Thomas stood his ground, and was terrific.
The Bruins had zero shots in the 3rd period.
The Sedins looked out of sync and uninterested. They had their ice time cut back to 16.5 minutes.
Markus Naslund was equally crappy.

Yes, Jan Bulis was decent tonight, so I will continue to cut him some slack.