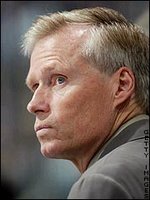 Andy Murray couldn't be out of a job for too long. He's a hell of a coach.
Poor Kitchen had only 38 wins in 131 regular season games as Blues coach.


Davidson mentioned that he does want Kitchen to stay a part of the organization.
The Blues are 7-17-4 this season, which is probably worse than most people had foreseen. Andy Murray should change this teams' work ethic a lot I'd say.
-------------------
Speaking of that, what the hell is Ken Hitchcock putting in the Blue Jacket players' Corn Flakes? Crack? The Jackets are on a roll.