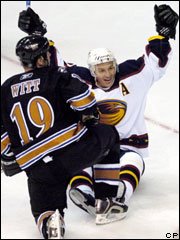 The Special Agent is coming to the Windy City! The Hawks have signed unrestricted free agent Peter Bondra. The terms of the deal were not disclosed, but my guess is a 1-year deal at about $1.2-1.5 million with incentives.
The Hawks have been performing well under new coach Denis Savard, and in fact have not lost in regulation yet. Adding a scoring winger like Bondra will ease the loss of Michal Handzus.

"He's a proven goal scorer," said Blackhawks general manager Dale Tallon. "He's a tremendously fit athlete who will add more speed and skill to our lineup. He will help our power play and his experience will greatly help our younger players."


Bondra has 878 points in 1044 NHL games. He has scored 50 plus goals twice and has been an NHL Allstar 5 times. At 38 years old, we probably won't even see Bondra score at a point a game pace, but you never know. He has been working out hard and waiting for someone to sign him. Peter still has the speed and soft hands and could see alot of icetime with Havlat, especially on the powerplay. Suprise us, Bondra.