Beware of the Bruins

Share All sharing options for: Beware of the Bruins 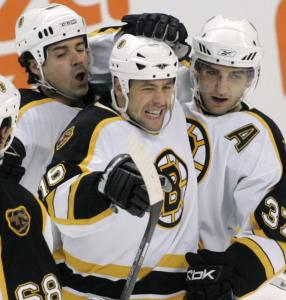 The Canucks take thier inconsistent circus show into Boston tonight at 4 pm pacific to take on the surging Bruins. This should be a treat because we don't get to see these two teams play eachother all that often...a crying shame, really.
The Canucks will need to get off to a quicker and better start tonight to avoid the same fiasco that occured in Minnesota on Tuesday night: a 5-2 loss. Hopefully, Roberto Luongo will not let in a softy 60-footer either.
The Bruins had a better fate on Tuesday night, obliterating the Senators 7-2. The Bruins are not to be f***ed with anymore. They have shaken off their early season slump and are rolling for the most part. But they suffer from the same inconsistencies as teams like Vancouver, Toronto, and Ottawa do, for example. They can beat a great team on one night, and then blow it against a mediocre team the next night. It all adds up to massive hair loss.
The B's are 6-4-0 in their last 10. They are still stuck in 12th spot in the cluttered East and at the bottom of the Northeast division. But not by much.
In their last 3 games, the have won 2 and lost 1. In that span, Marco Sturm has 4 goals and 1 assist, Marc Savard has 2 goals and 4 assists, and Patrice Bergeron has a whopping 2 goals and 7 assists.
So once again, the Canucks are going to have to hold those 3 in check, much like they did the other night against Iginla, Tanguay and Langkow. But the big difference in Boston, is that you can cover that trifecta of pain, but there are still guys like Glenn Murray and Brad Boyes who can bury the biscuit.
So which Canucks team will show up tonight? The soft, fragile, goal-less bunch, or the defensively genius, all guns-a-blazing spread-out scoring bunch that we saw in Vancouver?
My guess? Shit, I don't have a prediction. But to be honest, I don't mind the Bruins, so I won't be sour if they win.
Screw it, the Canucks will win this one in OT, 3-2.
Gametime, I'm going to go harass these guys at Ghosts in the Garden if they are around!
The Bruins own the Canucks in Boston all time, with a 38-7 record with 7 ties. But that stat doesn't really matter now, does it?

On a side note, if Jan Bulis is the best Canuck again tonight, I am going to break a Captain Morgan's bottle over my head, and cut my throat with the sharp end....