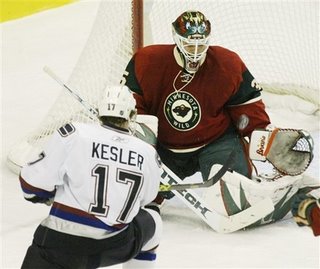 Sad...I can't think of any other way to describe this one. The Canucks got off to a great start, scoring about half way through the first period on goals by Ryan Kesler and Jan Bulis, 51 seconds apart. Good on Kesler to bag one, as he had gone on record after the last game against Nashville, saying he has had so many chances to score, but nothing was going in for him.
But this game was lost to the Canucks for 3 reasons...
Todd White's goal, that went off his skate was controversial to say the least. Should that have counted? He turned his skate and deflected the puck past Luongo at the end of the 1st period. To me, he didn't make a 'kicking motion' at the puck. The goal stood, and the Wild finally caught a break after the Nucks were OWNING them in the 1st period, up 2-0 and smuggling them defensively.
The penalty shot by Brian Rolston never should have happened. Ohlund did nothing to Rolston on Rolston's chance to score. Rolston merely fell on his own, after he got a shitty shot away. Lame duck call. But Rolston's penalty shot was unique...he blew a perfect slapshot past Luongo. 2-2. Fuck.....
From that point, the Canucks put out a good effort, but really lost their momentum, and the Wild took over. What also helped the Wild's chances was the fact that coach Jacques Lemaire pulled Manny Fernandez after the 1st period with the Canucks up 2-0, because he looked shaky and off of his game. Backup Nicklas Backstrom played a splendid game, not allowing any Canuck goals on 19 shots.
In the 3rd period, the Wild got goals from Nick Schultz, and two powerplay goals from Pascal Dupuis and Branko Radivoyevic.
One of the biggest reasons the Canucks lost this one is not the bad calls by the referees. It is their inability to capitalize on the powerplay. They were 0-6 on the night, and are among the worst in the NHL in that category. The Wild were 2-4. Sooner rather than later, the Canucks need to get the PP going, or they will not have much wins.
We were bagging on Luongo tonight because after Rolston hit him in the head with that booming slapshot, Bobby looked pretty sheepish. We thought he looked a little scared when Rolston took a slapshot for his penalty shot as well.
Oh well......

That's right, no Canucks in the top 3.