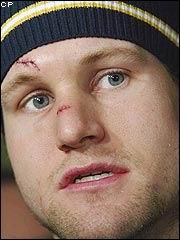 Practically every time the Canucks pushed into the Columbus zone last night, someone was beating them up. And if they weren't beating them up, they were laying them out. Naslund, with his head down, got laid out by Klesla in a hit that resembled the great Steve Moore hit of 2004. Klesla did it again to Morrison in the third.

But I can't stomach the fact that Vancouver is way way way too soft.

I know it's not exactly a barnburner statement. And I know their new work ethic certainly doesn't make them complete pushovers. But seriously, this is still hockey (just barely, right?) and we do need players who can put the fear of biblical rapture-esque pain in opposing players who squash, oh I don't know, your captain?!? Just recently Tucker took out Chara in a big hit and, while Chara was fine and can more then take care of himself, Mara answered for Zdeno by fulfilling a dream of many a fan and pounded Tucker's face for a bit.

Who do we have again? Cooke? Kesler? Bieska? Burrows? Sure, these guys can bump and smash guys in the corners with the best of them, but when a guy like the Ducks' O'Brien (here this Thursday mind you) or mongoloids like Barnaby or Avery or even (shudder the thought) Boogaard take liberties with our guys, who in the hell is there to answer the call? Besides that, what if we just need a massive hit to spark the team and tilt the advantage in Vancouver's favor?

The Canucks could look towards Manitoba, but for who? Lee Goren? He'd be fun for three seconds until he takes a hooking penalty because he can't skate. Marc-Andre Bernier? Hmm, not yet. Tyler Bouck (who may as well be called up just to sit and irk Bulis)? Rick Rypien would be a nice Cooke-like addition. Nathan Smith? Hahaha, just kidding on that last one.

I wish there was an answer somewhere out there. Maybe the sad truth is that it's just another reality for Vancouver fandom that, on top of everything else, we get to watch our players get manhandled. It's funny that I can tolerate so many other vital aspects of the game going poorly, but lacking the more minor element of sheer size, brawn and fists annoys me. Because, at this rate, this team would be in another concentric circle of hell if someone lays out Naslund badly and no one answers the bell.