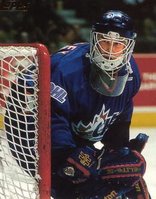 "We're really just beginning the second year of what's set up as a three-year cycle and I think I would prefer to see how it unfolds over a longer time period," Gainey said after a five-hour GMs meeting. "And if there's really drastic iniquities one way or another then that can be looked at with a little more background and little more evidence."


Fuck. The evidence is that we don't want to see Colorado 8 times a year, for example!
I'll bet the GM's of teams in weak divisions were mostly FOR the current schedule. Who's to say....
Lou Lamoriello said:

''I think it's the right decision and hopefully it stays that way,'' said New Jersey Devils GM Lou Lamoriello. ''This is the first year we've had with it, we had great playoff races last year. I can't see any reason why we would change it.''