Share All sharing options for: Thoughts about last night 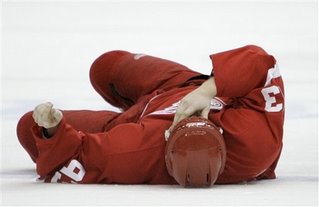 You are going to get sick of me saying this, but "shut the f**k up, TSN!"
Once again, James Duthie brought up the concussion issue last night, after Willie Mitchell knocked out Johann Franzen with a shoulder check to the head. He wants something done about it as did Bob McKenzie, who echoed his sentements that players are intending to injure, and should ease up to avoid head injuries. Not you too, McKenzie! Damn.
It doesn't matter if Mitchell would have taken 4 strides or 2 strides, Franzen would have been knocked out regardless. It's a f**king hard plastic shoulder pad!
"Players shouldn't be hitting their opponent so high." Whatever. It was a clean hit. Mitchell didn't jump. It was the unfortunate circumstance of Willie's height to Franzen's height. His shoulder happened to be the main contact area to Franzen's head. Do we want the hitter to bend down a bit when he hits so he doesn't have any chance of contact with the opponent's head?
"Intent to injure." Well, YEAH! Do you think Willie didn't want to hurt him? Of course he did! Did he want to send him to the hospital? I doubt it. Hurting someone is a part of the game, even if players won't admit it. But they aren't out there to annihilate the guy and end his career.
"It is going to take a headshot on someone like Sidney Crosby before the NHL does something about it." Now THAT I can agree with. And hopefully when they do something about it, it will be the elimination of the plastic shoulder pads, and that's it.
----------------------
I like the race going on for the final playoff spot in the West. In order, it's Edmonton in 7th, with 25 points, Vancouver in 8th with 23 points, Calgary in 9th with 22 points, and Colorado in 10th with 22 points. Calgary is the best team in the past few weeks with a 7-2-1 record in their last 10. They look to move up quick.
Minnesota, who is tied with Edmonton in points, are only first in the Northwest because of goals for. The Wild are on a massive slide (3-6-1 in their last 10) after starting the season so well. They have key injuries to Marion Gaborik groin) and now Pavol Demitra (head).
This division could be a dog fight right until the end of the season. Love it. The same can be said about the playoff race in the Western Conference.
---------------------
Ken Hitchcock, the newest Blue Jackets' head coach, had this to say today:
"We can't hang our heads and roll our shoulders, we've got to strut, and we're going to start doing it tomorrow."
They had better strut, or else Hitch will start yelling at them and go on one of infamous tirades.