Share All sharing options for: A thought: Brendan Morrison for Anson Carter? 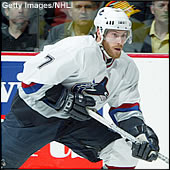 This idea was brought up by Stan Fischler at MSG:

Our man in Vancouver, Ron Spence, has an interesting bit of advice for Dave Nonis: "Trade Brendan Morrison for Anson Carter. The Canucks would lose some money but regain a guy who played well with the Sedins last season."

Lose some money BUT regain fir for the Sedins? He must mean AND. Morrison is worth $3.2 million and Carter's deal is worth $2.5 million.

What do you think of this idea?

Spector asked:
And who takes over as the Canucks second line centre in this deal? An overpaid Ryan Kesler? An aging Trevor Linden? Vigneault's whipping boy Jan Bulis?

Nice!
My thought on this is that it would be a great idea, but I'm sure Dave Nonis is biding his time on any trade (except one for Jan Bulis) while the Canucks still hold a playoff spot and aren't out of it, yet.
But if the Canucks were in trouble, say in 11th spot and falling, I would pull off this deal in a heartbeat. Sure, the Sedins are at a point-a-game pace, but myself at least, I expect them to reach the 100-point mark soon. This probably isn't going to happen unless Naslund plays on their line full time. Even so, Markus is not as good of a fit with the twins as Carter was....yet. On top of that, Naslund is being used on the second line to try get the rest of the offense going.
I would rather have Kesler play on the second line and trade Morrison for Carter right now, but I'm also impatient.
What would you do?
Is there a morality issue taking a guy like Carter back after he walked away to get paid more?
Or do you welcome him back when your team is desperate to score and needs him?
Is Morrison going to regain his form or flounder?