The Ducks is a terrible name for any professional team

Share All sharing options for: The Ducks is a terrible name for any professional team 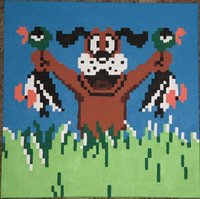 I'm sad I can't rip on the formerly-painful Disney connection to that team (seriously, has anyone seen those movies? Hang you head in shame if you saw the second. And if you went to the theater to see the third throw yourself in front of a train please).

Part of me hates the Ducks because, well, I hate almost all teams in the west. That's part of my agreement on being a Vancouver fan. The larger side of me hates them because of Burke who I really did enjoy as a GM and, nothing against Nonis, but I miss the surly old guy. He’s always fun at a press conference and looks like he'd steal candy from a baby and have no ethical dilemma with it whatsoever. I appreciate that, we need more like him.

But a smaller side of me hates the Ducks because they're just so damn stacked on D and Vancouver, sadly, is close to icing Fin in the 6th slot. Seriously, the idea of countering Niedermeyer and Pronger with (assuming Mitchell and Salo are out) Ohlund and Bieska is beyond comical. Their top two D-men are friggin tied with Selanne for the team lead in points and they also get great scoring support from the likes of Kunitz, Perry, McDonald & Getzlaf. Chuck in a nice goalie tandem and you can recognize why no one has beaten the Ducks in regulation this year so far.

What to look for – Protecting that lead. The Ducks have had 10 one goal games and the Canucks have had 12. I’m not suggesting the Ducks have similar scoring issues that Vancouver currently has (they can’t considering they lead the conference in goals scored), but it seems to me the likelihood of a single goal deciding the victor is quite possible. Assuming the Canucks don’t implode like they did at San Jose and in Minnesota last week, it could very well come down to a game of protecting the lead (something, again, the Canucks aren’t exactly the model for). If the Canucks can grab the lead, look for a complete mess in the neutral zone and Vigneault possibly turning purple pleading for the D to not take a dumb penalty. It’s going to get messy and it wouldn’t shock me if the refs’ whistles decide this thing.

Prediction: Canucks win 4-3. I know, four goals from this team? Nutty! But I’m going to assume the Ducks and Canucks go back and forth a bit with the Canucks getting some late heroics from Luongo. Pyatt’s too easy a call to end it, so let’s say The Emulator comes up huge here.

Post-game Update: Woah, was I off! Insert humiliation right...about...HERE.