Being from Northern B.C. and not getting to the big city all that much, I do not get to meet any celebrities all that often. For the most part, I'd rather meet hockey celebrities more than, say, Harrison Ford or Anthony Hopkins. Metallica would be an exception.
On Wednesday, I had the great experience of having an hour-long conversation with a man named Barry Salovaara. Barry, who was born near Toronto, played 90 games on defence for the Detroit Red Wings from 1974-76. He produced 2 goals and 13 assists. He currently is a sander belt salesman.
I managed to interrupt his business with one of my bosses and started asking him questions about life in the NHL. Barry's eyes lit up when I asked him, so I pulled up a chair, eager to hear some stories.
The first thing he talked about was when the Red Wings suffered from the "Philadelphia Flu." This was an "illness" where some of the Wings players would avoid being in the lineup whenever they realized that they were going to soon play the Flyers. They would go into "physiotherapy for injuries". Barry wasn't one of them, as it gave him more opportunity to play in the NHL.

I didn't know this, but Alex Delvecchio, who played on a line with Gordie Howe years prior, was coaching the Red Wings when Barry played for them.

It seems as thought the toughest guy that Salovaara played with was Dan Maloney. He told the story of one time when there was a brawl during a game with the Flyers, a couple of Flyers on the bench were going to hop over the boards and enter the fray, and all Maloney had to do on the bench was put one leg over the boards, and the Flyer players would rethink their ideas.

Salovaara also played in the Austrian and Finnish leagues, where he was paid about $15,000 per year, and his housing and vehicle expenses were paid in full. In the Finnish League, he played against youngsters named Jari Kurri, Risto Siltanen, and Reijo Routsolainen.

The first NHL goal that Salovaara scored was in Madison Square Garden against the Rangers on goaltender John Davidson. The Rangers were mounting a comeback after being down 4-0. The score was now 4-2, and Salovaara scored his first goal to make it 5-2 and change the momentum. Good stuff.

His favorite player growing up? Bobby Hull. Barry admired the Black Hawks growing up because he played for the Hawks' affiliate team, the St. Catharines Black Hawks from 1965-1968.a

I found myself feeling like a kid listening to Barry. Like I said, I don't come across former NHL'ers very often. I've never even met Jerry and Joe Watson, who were born here and won 2 Cups with Philly. Even though Salovaara played only played 90 NHL games, he still has alot of stories to tell from his experince there. And he tells them with passion, like he was just there all over again.

After searching his name on the net, I found out something else about him that he didn't get around to mentioning. He went on an arctic expedition on a dog sled, had a crazy Polar Bear experience, among other things. 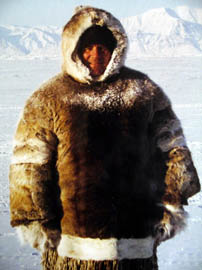 What a great guy. It was a pleasure talking to him, and watching the Nucks whoop the Red Wings with him. He has great insights on the game.