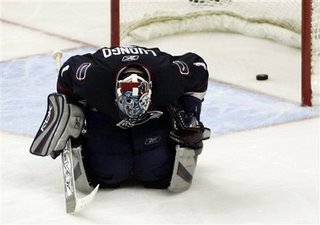 The picture pretty much tells it all. The Canucks were in this one right up until Bobby "The Not-So Brain" Luongo flubbed on Johan Franzen's slapshot from the circle at 6:19 of the 3rd period, to make the game 3-2. That pretty much deflated the Canucks at that point. Any momentum they had was squashed, and the Wings finished this one off. Sure, Jan Bulis is a knob. He 'interfered' with Hasek in the crease when Alex Burrows scored the potential tying goal. That could have tied it...yadda yadda. Luongo should have stopped that shot by Franzen...why???? Because the Nucks are paying him $6 million to stop those ones to keep the team in it. Once again, Luongo is not equal to the task.
The fact that Detroit outshot Vancouver 24-10 when the 2nd period ended is still only a minute part of the problem.
Once the dust settled, Canuck fans were left with another heartbreak. The Canucks were dealt a critical blow, as Calgary beat St. Louis tonight and took over 8th spot of the Western Conference, and won their 5th straight game. The Canucks are out of the playoff picture in 9th, 1 point behind. They have lost 6 of their last 7.
Any positives in this one? Well...Burrows was terrific tonight, and Willie Mitchell returned...but this loss was a stinger.
Zanstorm's 3 stars:
1. Daniel Cleary. 2 assists.
2. Dominic Hasek. Winning goalie, looked pretty sharp. Is a better diver than Greg Louganus. Piece of dung.
3. Kevin Bieksa. A great game by Bieksa. Finished a +1 in a losing cause, and had many chances.

Zanstorm's I hate Bulis meter:
12.5/10. Fucking Bulis. Hope you get hit by a bus, you gutless weasel.