Predators 6 Canucks 0: Hell has thawed out!

Share All sharing options for: Predators 6 Canucks 0: Hell has thawed out! 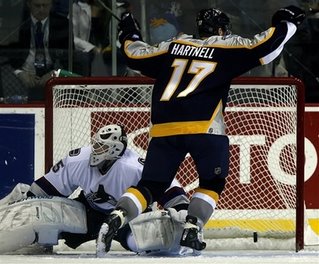 There really isn't much to say about this one. After a spirited OT win over Detroit on Wednesday night, the Canucks came out flat in this one and got burned. Danny Sabourin got the start for the Canucks again, and got beaten twice early in the game much like his first outing with the Canucks. This time it wasn't on his first 2 shots.
The Canucks didn't help his cause at all. The quality chances that Nashville got were uncharacteristic chances for the Canucks to give up. Sabourin was getting murdered by his own team.
I have to say though, that Sabourin looks pretty small in net. He does not have Luongo's stature. When he goes down in the butterfly, there is a ton of space that opens up in the top of the net. Maybe he should put some pillows inside his padding or something. He was beaten on his glove side on almost every goal.
The Nashville fans were giving poor Danny a hard time as well, yelling "Thabourin! Thabourin! Thabourin! Thucksth!" It sounded funny because none of them have any front teeth!

I hate Bulis meter:
Has been changed to the Jan Bulis Suckometer!

Hey Jan, how did it go tonight? 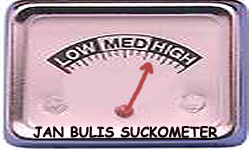 Oh boy, not so good, huh? At least he didn't take any penalties...
that is what dropped the reading a little.