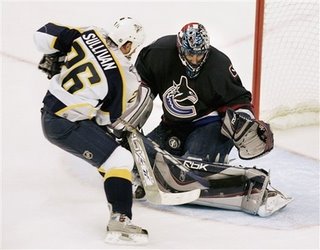 The Predators got revenge for their loss in overtime to the Canucks on October 21. With under 6 minutes left in the 3rd period, JP Dumont stole the puck from an attacking Canuck in his zone, and fed a pass out to a streaking Steve Sullivan. Rory Fitzpatrick was the only Canuck even near Sullivan. He failed to intercept the pass as he was in transition, and Sully broke in alone on Bob Luongo. Luongo stopped Sullivan cold, as the Predator star tried to put the puck 5-hole, and that is where the confusion started. After Sullivan took the shot, it looked as though Fitzpatrick was thinking that Luongo would cover it up. But the shot produced a bouncy rebound, and Sullivan didn't give up on the play, taking a wild swing at it, and barely putting the puck over a sprawled out Luongo. At this point Mattias Ohlund had made it back, but was too late. 3-2 Preds. The Canucks made a valiant effort to come back in the final minutes, but were either thwarted by Tomas Vokoun, or the Predators defence.
To me, the Canucks lost this game in the first half. After a few days off, the Canucks looked absolutely flat, and took the first 5 penalties in the opening 25 minutes. By then it was 2-0 Preds on goals by Alexander Radulov and Ryan Suter (PP).
When they finally got their legs going, and some momentum, they managed to tie it up on goals by Mattias Ohlund and Markus Naslund.
But this party was ruined by Steve Sullivan.

Zanstorm's 3 Stars (tough ones to pick)

1. Luc Bourdon. He's not even close to being NHL calibre.
2. Rory Fitzpatrick. Blunderous.
3. Vern Fiddler. One stick shot to Naslund's groin, and moments later, shooting the puck at Luongo after a whistle...2 minutes for being STUPID, Vern!