Share All sharing options for: Potential new Canuck jerseys # 3 and #4

I'm not sure how much of you knew this, but the true definition of a Canuck is "U.S. slang for Canadians, especially French Canadians." Also, "a Canadian in general and a French Canadian in particular."
The term Canuck has been used since at least 1869, when the political cartoon Johnny Canuck was circulating.
Anyway, keeping the French part of the definition of "Canuck" in mind, and being inspired by that, here are a couple more Canucks jerseys based on our country's history involving voyageur, settlers, and traders. 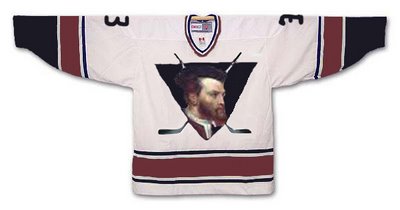 The first is Jacques Cartier, a settler and trader who graced our shores 1534 after crossing the Atlantic in only 20 days. The Huron Indians were friendly with him at first, but became volatile when they realized he wasn't planning on leaving! 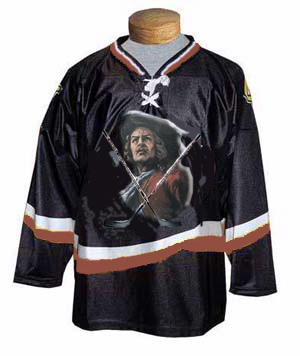 The second jersey is of another settler and trader. Louis de Frontenac has a pretty good resume as well and is a huge part of our history. Frontenac and his men discovered the headwaters of the Mississippi River, built a fort at present-day Kingston Ontario, which was a communications post for western trading posts, and as well held back Iroquois raids.
These are my two patriotic jerseys. Hope you get a real kick out of them!