No questioning the Leafs' character

Share All sharing options for: No questioning the Leafs' character 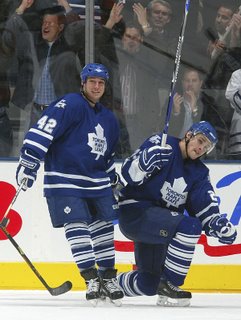 Suddenly, the 2 losses in 2 games and the goal scoring 'drought' is now only a memory, as the Leafs handed the Islanders a 4-2 defeat last night. Paul Maurice, regardless, was not satisfied.

"We didn't play the way I wanted in the third period. Clearly, there was not enough profanity on the bench early in the game," Maurice said. "I did a nice job of fixing that in the third."


The Leafs let up in the second half of the game, and made defensive blunders throughout, but the returning Andrew Raycroft made save after dazzling save. Even Rick Dipietro was making head-shaking saves in this one.
Alexei Ponikarovsky sealed the deal late in the 3rd with a powerplay goal.
Despite Maurice's rant, which is justified, the Leafs responded offensively when they had to, outshooting the Isles 33-21. The Wellwood-Antropov-Ponikarovsky line looks pretty decent, and could almost be worth keeping intact when Sundin returns. But I wouldn't count on it.
It is great to see the emergence of those 3 players though, I must say. A pleasant suprise. Wellwood, who had a goal and an assist last night, has 19 points in 22 games this season. Ponikarovsky has 17 points in 22 games, and Antropov, who is starting to look a bit like Bertuzzi in his prime, has 8 points in 11 games. Don't let me exaggerate though!