No Mats for a month

Share All sharing options for: No Mats for a month 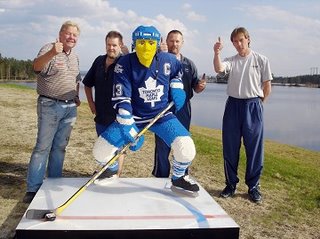 Mats Sundin will be out of the Leafs lineup for 3-4 weeks with a slight tear in his right elbow.

''It's a slight tear of the ligament,'' Leafs GM John Ferguson said Wednesday. ''It happened in the first period (of Monday's game against Philadelphia) and he played the rest of the game. He won the faceoff for the winning goal in the third period.
But he was obviously under some great deal of discomfort after the game.''


Now we'll see what the Leafs are made out of without their captain. Ferguson also mentioned that this will be an opportunity for others to step up and fill the hole. And I think that will happen. There are plenty of Leafs scoring right now, so there is no reason to panic.
This could be a good chance for Nik Antropov to get going this year. With his Sundin-like size and mysteriously skilled hands, he could emerge in Sundin's absence.