No love/hate for Alfredsson

Share All sharing options for: No love/hate for Alfredsson 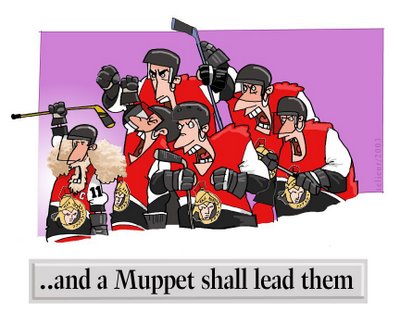 I just had to pull this gem out of The Instigator, now that Alfie is being bashed in Ontario. He is off to a rough start (6 points in 11 games and a $4.67 million salary). Hell, even the ending to last season's playoffs was a killer for Alfie, when Sabres forward Jason Pominville made him look stupid, skated around him, and scored the series-winning goal. Alfie has not recovered...yet. And now the trade rumors..
But don't tell his teammates that.

"I don't think there's a guy in the room that will listen to that," Senators defenceman Wade Redden said. "He's a key guy and a leader for us."

"But if you watch him play and see how hard he's working, it's a totally different story."

"Obviously, it's a struggle and at times it becomes mental - I'm thinking too much," he said following Thursday's practice. "But things can turn around. I still know how to play this game, so it will come."

"Nothing feels different, sometimes you go through difficult times and you've got to fight through it."


Alfredsson will soon return to form, and he will start scoring. It would be a travesty if he didn't. But is Alfredsson the man who should be leading this team? This is not a good time for him to be struggling. Well, at least the Senators are winning again, but who cares about right now? We know the Sens will make the playoffs. But is Alfredsson going to lead this team to glory? At what point is enough enough? Regardless of what the players say (they have to defend their own to the media), Ottawa needs a real captain. I say put the C on Dany Heatley, if he is willing.
Truthfully, change really IS good sometimes, as Don pointed out at the Battle of Ontario.