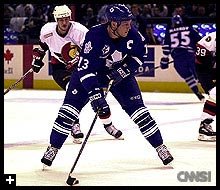 After reading a piece on TSN about the Leafs missing Mats Sundin after losing 2 straight, I can't help but not feel bad for them. At least Paul Maurice has his head screwed on properly.

"We're not going to replace the big man, we know that, but we were still scoring enough goals (when he was first injured)," said Maurice. "I expect that group we have to score goals."
"Our offence . . . is showing signs of complacency I think," said Maurice. "What happens is you score some goals and you get a little bit of confidence and you start taking it for granted a little bit."


I read a piece from Maple Leafs chat.com, and one Leaf fan named Denoit pointed out that the Leafs have succeeded in the past in Sundin's absence.
In 2005-06, Sundin fractured his orbital bone early in the Leafs' first game of the year. The team responded with a 6-5-1 record.
A bigger, more shocking stat, which I almost forgot about, was in 2001-02, where Mats suffered a broken wrist in game 3 of the 1st round against the Islanders. The Leafs won that series 4-3 without Mats, and then beat the Senators in 7 games without their captain. In the semi-finals, the Leafs won game 1, Sundin came back in game 2, and the Hurricanes won the series in 6 games.
So what am I saying? That the Leafs are better off without their captain? I think sometimes they are, especially when they rally around their fallen comrade. In both cases, a player emerged to lead the team on. Last season, it was Eric Lindros. In the 2002 playoffs it was Gary Roberts. Who will take the reins now?
I don't want to hear the players, or TSN for that matter, even talk about missing their captain right now. Sure they have lost 2 straight and scored only 2 goals in the process. But they scored 11 goals in the first 2 games after Sundin was injured as well.
No excuses. There is plenty of offence on the Leafs squad right now. Suck it up and play on. The Buds play the Islanders tonight at 4:30 PST. I say they will score more than 2 goals.
Rumor has it that Mats will return on Saturday against Boston.