Share All sharing options for: Leclair put on waivers 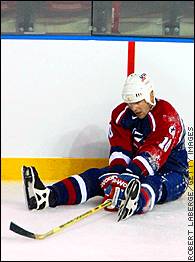 Ah, the joys of being an 'old guy' on a young team. John Leclair now sits in the corner of the rink wearing his favorite Team USA jersey, hoping someone will take a chance on him.
Leclair has 2 goals and 5 assists in 21 games this season and seems to be in rapid decline. He is making $1.5 million this season, the final year of his contract. I still think he has more to offer a team than say, Jason Allison, who still remains in limbo. Leclair still has some speed, but is injury-prone as well. He had 51 points in 73 games last season.
So, do you think anyone will take a chance on Leclair? I think the Canucks should claim him and put Bulis on waivers. Just a thought.
Mark Recchi had nice things to say about his buddy today.

"He doesn't say much. He's the ultimate professional," Mark Recchi said. "Hopefully, something good happens for him, whether it's here or somewhere."
"He comes in. He works hard. He's a dream for an organization. Obviously, he's not happy sitting out, but he comes in, he has fun with the guys. You would never know."